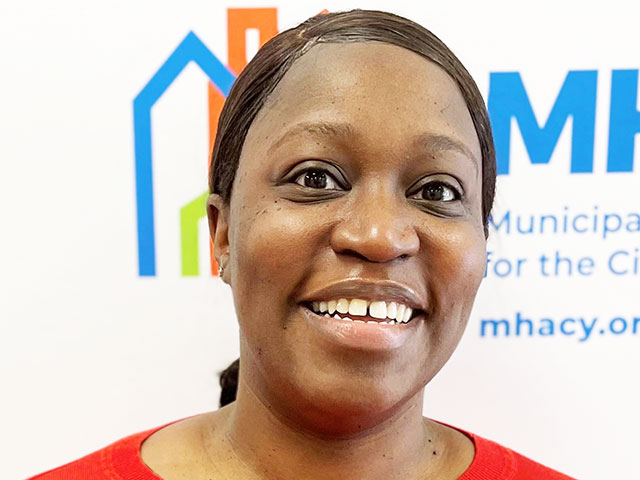 Lakisha Collins Bellamy remembers the day she moved into Cottage Place Gardens in the summer of 1985, but even more memorable was the day in November of 2007 when she returned for her first real job with the Yonkers Municipal Housing Authority.

“It was fate that I came to work for the Housing Authority,’’ said Lakisha., who currently serves as MHACY’s in-house counsel. “And it has been rewarding ever since.’’

Lakisha is a homegrown success by any account. An attorney who was admitted to the New York State Bar in June of 2015, she was appointed to serve on the Yonkers School Board this past summer. She holds a master’s degree in public administration and a bachelor’s degree in political science.

The road to her success started at MHACY in 1997 when Lakisha was a college freshman and took a summer job with the housing authority. “As a 19-year-old I was so impressed with the people and the level of work that was being done. “I said ‘when I graduate, I’m coming to work here.’’

But her life would take some additional twists and turns before ending up at MHACY. While she was earning her master’s degree, Lakisha worked for the Westchester County Board of Elections, but was looking for a higher paying position to help support her infant son. Her cousin told her that a civil service test was being offered for a position at MHACY, but she initially missed the deadline for submitting the application.

“I thought it was over, but then she called me again to say that they reissued the test and I had better apply. It was really divine intervention that God opened that door again,’’ she said.

When the letter notifying her of the test scores arrived in the mail that day in September, Lakisha’s hands were shaking as she opened the envelope. She was praying while holding her son, who was only four-months old. Not only had she passed the test, but she was the top scorer!

“I said thank you, Jesus, because I didn’t just want this job, I needed it to survive,’’ she said.

Lakisha worked her way through the ranks at MHACY. As the Director of Housing Programs, she oversaw daily operations of Section 8, Low Income Housing Tax Credit and Public Housing programs, eventually spearheading a software transition that improved the quality and increased the efficiency of customer service throughout the agency.

After attending the City of Yonkers Management Academy, Lakisha renewed her commitment to becoming a lawyer, and managed to finish law school part-time and summers in 3 instead of 4 years. Her son, Justin, then nine, walked on the stage with her when she received her law degree.

When she took the bar exam, she knew she would pass after the question fatefully was one on housing law.

Now 13-years after taking her first job at the Housing Authority, Lakisha says she is grateful to all the people who helped her to achieve her goals, and that her career path brought her back to MHACY.