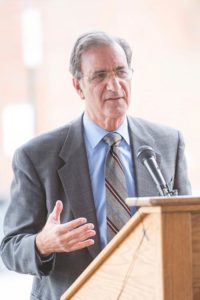 Joseph Shuldiner, MHACY’s Executive Director, is a visionary with a long and esteemed career in housing. He began his career as a Legal Aid lawyer in the Bronx with a focus on tenants’ rights. He worked for the NYC Department of Housing Preservation and Development (HPD) for thirteen years in a number of capacities before moving on in 1986 to lead the New York City Housing Authority (NYCHA) as its General Manager. After leaving NYCHA he became the Executive Director of the Los Angeles Housing Authority before being appointed by President Clinton in 1993 as HUD’s Assistant Secretary of Public and Indian Housing. In 1995, when the federal government took over the Chicago Housing Authority (CHA), Mr. Shuldiner agreed to spearhead HUD’s efforts to transform the agency, and under his leadership CHA was removed from HUD’s troubled agency list.

Since Mr. Shuldiner became MHACY’s Executive Director in 2007, he has overseen every aspect of the Authority’s work. His goal: “I want to leave a housing stock that will be available for people who need it for a long time. Upgrading it and providing viable housing to the next generation of people who need it is important. As an authority, it would be great to continue to be integrated further into the larger fabric of things, so that the authority is not looked at only as a group that houses poor people, but as a vibrant part of our community. We’re part of the renaissance of Yonkers. I think that’s important.”

During Mr. Shuldiner’s tenure MHACY has continued with the construction of affordable units at Grant Park, it has initiated a comprehensive revitalization plan for Cottage Place Gardens and the Warburton and Ashburton neighborhoods which includes the construction of additional family and senior units, and it has commenced the massive redevelopment of the Authority’s distressed public housing. During the process Mr. Shuldiner has emerged once again as a national leader in the field of low income housing.

Mr. Shuldiner holds a Bachelor of Arts degree from Brandeis University and a Juris Doctor from Columbia School of Law. He was selected for a fellowship to attend Harvard University‘s Kennedy School of Government Program for Senior Executives of State and Local Governments. Mr. Shuldiner was a founding member of the HAI Group, a family of companies dedicated to serving the insurance and other needs of the public and affordable housing community.